EXIM’s team jointly travelled 7 395 kilometres within the framework of a challenge campaign.  At the end of the two-month programme, the participants donated HUF 1 000 for every kilometre travelled to the Pál Heim Children’s Hospital. Meanwhile, hundreds of photos, inspiring personal messages and several hours of music were exchanged - from home. Having reached the finish line, the programme continues: the team of Raiffeisen Bank will carry on the #EXIM1000 challenge and launch their charitable team building campaign.

“2020 was a very difficult year; it would be great if we could go on a team building trip. I haven’t seen my colleagues for practically a whole year and perhaps they won’t even recognise me back in the office since I have gained so much weight.” - Since last spring, for most companies it has been increasingly difficult – given the exhausted colleagues forced into home office  and the enormously  changed circumstances - to maintain the team spirit and the value of personal relations  and to make up for the lost personal encounters, discussions outside the workplace and generally the joy of  reunion. Internal CSR gained new meaning and had to face new challenges while the health and social situation caused by the pandemic further accentuated the companies’ external CRS activity. All these issues presented a recurrent challenge for employers, HR and communication leaders even before the pandemic and the suddenly changed situation forced them to redesign their activities. But how? EXIM Hungary, the export credit agency of the Hungarian bank sector responded the challenge with a challenge; this is how the #EXIM1000 game and the subsequent EXIM challenge came to life.

“The team achieved several quantifiable milestones in 2020. Our colleagues’ performance was extraordinary, both personally and professionally. We had really high hopes that this year we would have the opportunity to celebrate and toast to our success after last year’s  missed corporate team- building events but unfortunately the epidemic situation has still prevented it. So we started brainstorming about the possible alternative solutions. Weariness due to the lack of relaxing and personal encounters became increasingly tangible; thus it was also crucial to find a solution to these problems besides the celebration of last year’s professional success. Last year – presumably similarly to other companies - communication between the company and the employees was about their tasks and the protection of their health and safety. However, we deemed it extremely important that our company committed itself to an external CSR activity that was close to the heart of all our colleagues so that they would get involved even personally by taking action. These three concepts gave rise to the idea: let us raise the team spirit, the desire to help and spirit of competition simultaneously, let us compete with one another and ourselves and let the result of our overall performance be our common achievement as a team in order to be able to attain another kind of good goal this time. -  said Orsolya Szőke, Head of the CEO's Cabinet and PR & Communications at EXIM Hungary about the beginning of the game.

The slogan of the game became: “Let’s do it again, together, for a good purpose!” From January, our colleagues received clues and playful riddles by email and the Intranet that indicated that something big was coming. Everyone got a T-shirt with “#EXIM1000” on it and then on 3 February everything was revealed at a virtual all-staff meeting and the challenge was launched. The essence of the game was the following: let us move, let us have some sport apart from one another but still together. Let us collect 1000 kilometres together, let us perform 1000 again as each kilometre means HUF 1000 for the Pál Heim Children’s Hospital.

One of the important conditions of the game was that people could participate individually and contribute to the total performance of the team with their own results. Those who completed their own challenge had to officially pass the imaginary baton to three further colleagues who had to walk, hike, jog, bike or row at least 3 kilometres according to their choice, take a selfie and a sport app photo, upload them on the exim1000.hu webpage set up for the game. Then EXIM changed their kilometres to donations to the Pál Heim Children’s Hospital. A Spotify playlist titled #EXIM1000 was also created as music unites people even if only virtually in the present situation. During the two-month period of the game, the participants received weekly prizes and unusually casual messages by email two or three times a week.

“The proof of the activeness, enthusiasm, competitive drive, cooperation and helpfulness of the EXIM team is the fact that the participation rate was over 80%, more than during the usual team-building and sports days and the average performance exceeded 28 km/”player”. A non-exhaustive list: we exchanged nearly 700 photos, shared more than 16 hours of music and sent hundreds of encouraging and appraising emails not related to work. We discovered the so far latent creativity, sense of humour and outstanding sports achievement of many colleagues. Team EXIM joined forces and cooperated as one man. We ran, hiked, biked and rowed 7 395 kilometres instead of the originally set 1000-km objective, more than seven times exceeding our initial goal: we donated HUF 7 395 000 to the Pál Heim Children’s Hospital. We demonstrated once again that we can form one team even from home and we can meet any challenge together.” – summarized Ms Szőke, Head of Communications the success of the campaign beyond all expectation.

The donation of EXIM was delivered on 20 May at an outdoor event organised in the Pál Heim Children’s Hospital with a limited number of participants.

However, the game continues: the baton was taken over by one of the most important partners of EXIM. Raiffeisen Bank Plc., winner of the EXIM award, Bank of the Year in 2019 will carry on the challenge. In the coming months the employees of Raiffeisen Bank will also  exercise individually and yet as one large team for the Pál Heim Children’s Hospital.

“We trust that the program will also be a success at Raiffeisen especially as the improving weather and the enthusiasm of the colleagues will also contribute to the implementation. We have joined the initiative with joy and great commitment in the hope that later the program will be continued by another bank.” – said  Veronika Yalcinkaya, Marketing and Communication Director at Raiffeisen Bank. 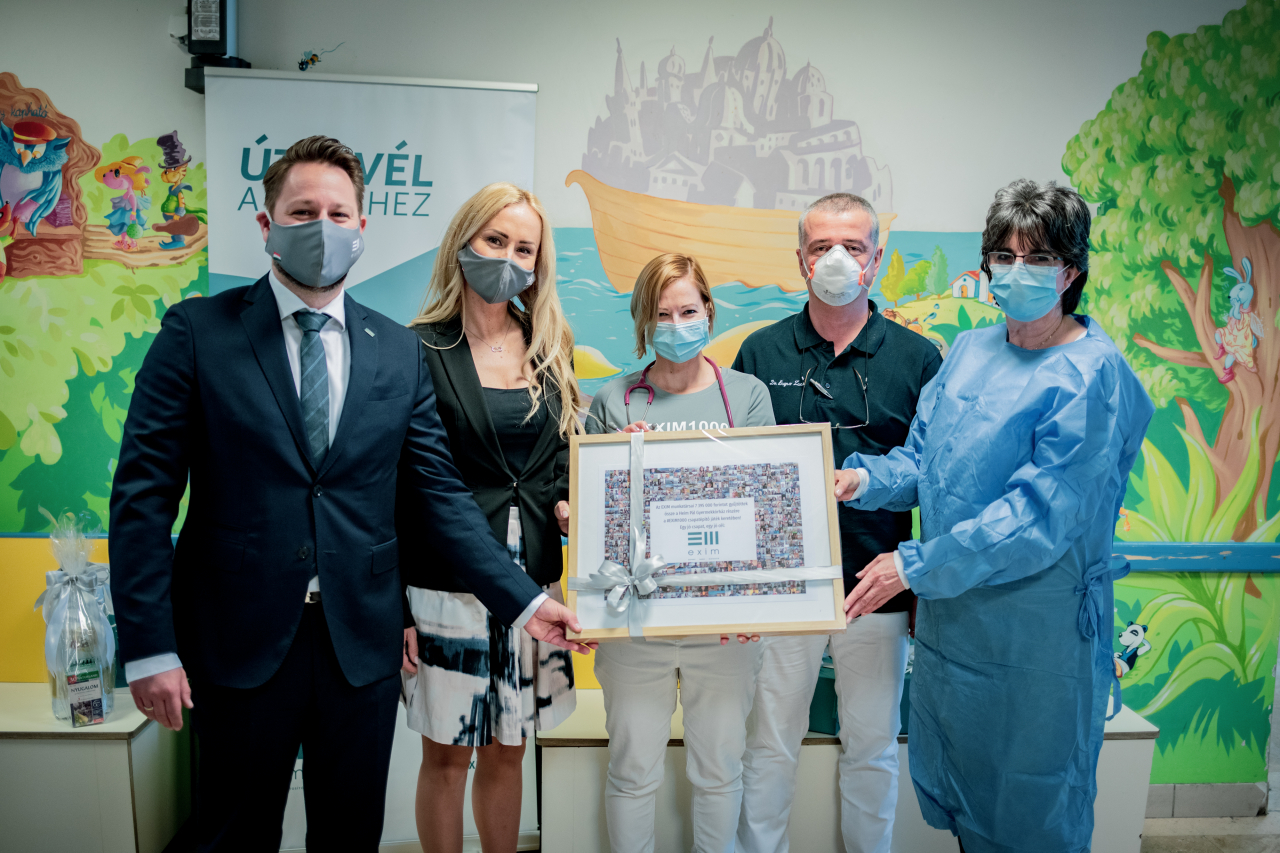 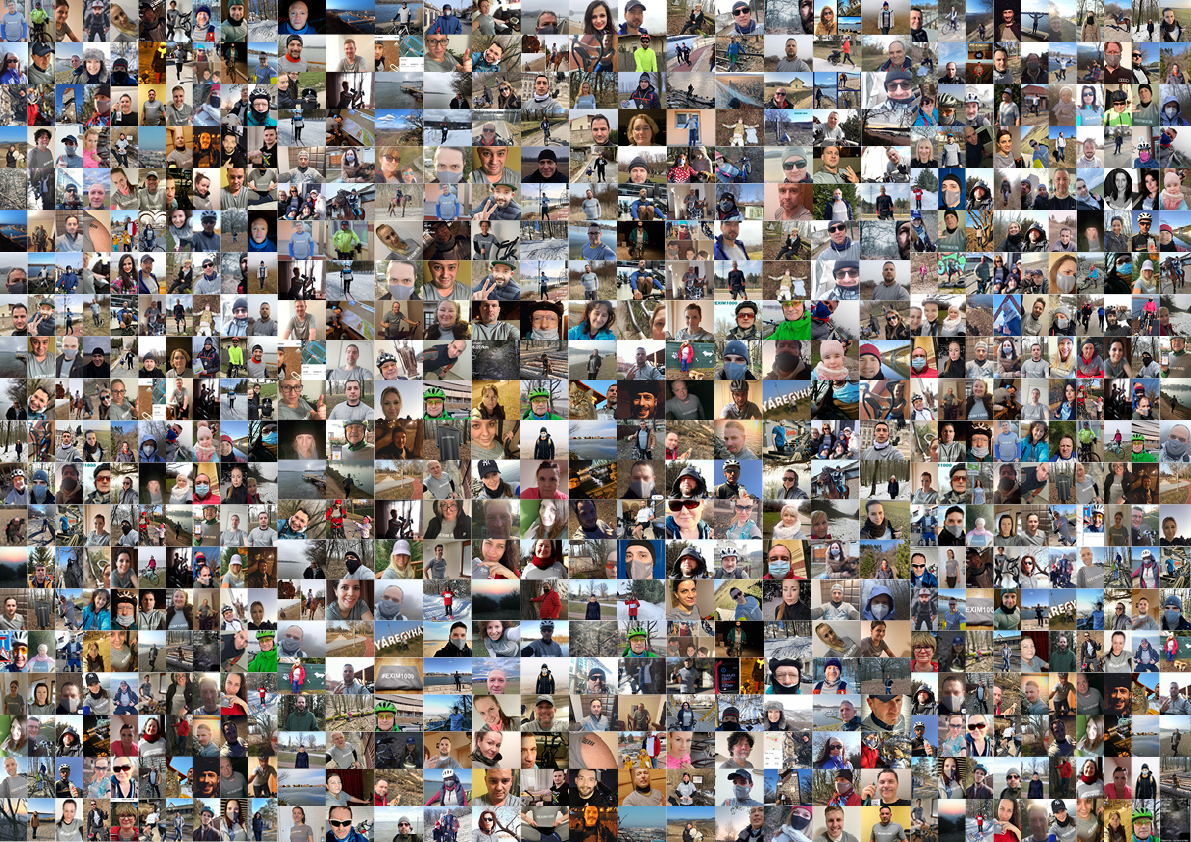 (In the picture: Selfie photos of EXIM employees  taken during the individual challenges)

Orsolya Szőke, Head of the CEO's Cabinet and PR & Communications at EXIM Hungary

EXIM Hungary is a bank and insurer operating within an integrated framework whose main purpose is to provide effective and customized financial and risk-insurance services and products for Hungarian export companies, their suppliers and enterprises planning to export. Our mission is to support Hungarian enterprises as a financial engine that helps drive the success of domestic exporters in foreign markets and to deliver a kind of passport to businesses to promote their foreign market success with financial solutions.

EXIM Hungary is one of the 85 export credit agencies of the world and thus we focus on  facilitating the successful sale of Hungarian goods and services in foreign markets and expanding Hungarian export capacitites.

Raiffeisen Bank Ltd. was established concurrently with the establishment of the two-tier banking system in Hungary. The bank is one of the leading universal banks in Hungary. Expertise and professionalism, high-quality customer service and a solid owner's background are key success factors in the bank's strategy. Raiffeisen Bank maintains an extensive network of 67 branches in Hungary and employs over 2000 people.